The East Gippsland Catchment Management Authority (EGCMA) has been working with Jarrahmond landholder Mark Johnstone to stabilise a section of Gunns Creek previously eroded by a flood.

“We might currently be in drought, but when it does rain, water can flow fast through these gullies, and that brings the potential to damage our waterways,” said Mr Johnstone. “We knew we had to protect this area or face the potential of further damage.”

With rocks strategically placed, Mark enlisted the support of the Far East Landcare Network and a Victorian Landcare Grant to plant native seedlings.

The 6500 shrubs and grasses will provide food and habitat for critters, and also help to slow future floodwaters before they get into the channel country.

“It was a great collaborative effort,” said Mr Johnstone. “We had 22 students from the Alpine Coastal School, they arrived and immediately just got stuck into planting 1200 seedlings, a fantastic effort.”

“We followed up the next weekend with Landcare and community members volunteering their time to plant the rest. It’s nice to know that people will get behind these projects if you put it out there, people are willing to help.”

“The State Governments ‘Water Plan for Victoria’ recognises that getting people involved in our waterways is good for our health and wellbeing,” said Graeme Dear, EGCMA CEO. “This project will improve the condition of Gunns Creek and is a great example of our communities getting stuff done.”

Landcare groups across the region have been polishing up on their technical skills in recent weeks, undertaking computer software training provided by the East Gippsland Catchment Management Authority (EGCMA) in sessions run in Bairnsdale and Orbost.

The EGCMA has developed a simple to use software program to help community groups record projects they’ve undertaken and the improvements they have made.

Rena Gaborov from Goongerah Landcare Group appreciates the simplicity of the program and the ability to convey projects visually using a map. “It’s easy to upload our data, knowing that we can refer to what we’ve been doing over years just by clicking on different points.”

Carolyn Cameron, Community Projects Officer at the EGCMA, hopes that the training will ease the administrative burden on groups. “We’ve tried to create a simple program to help our Landcarers report on their projects and better convey all of the great work they do.”

This program has been developed with the support of the Victorian Landcare Program. 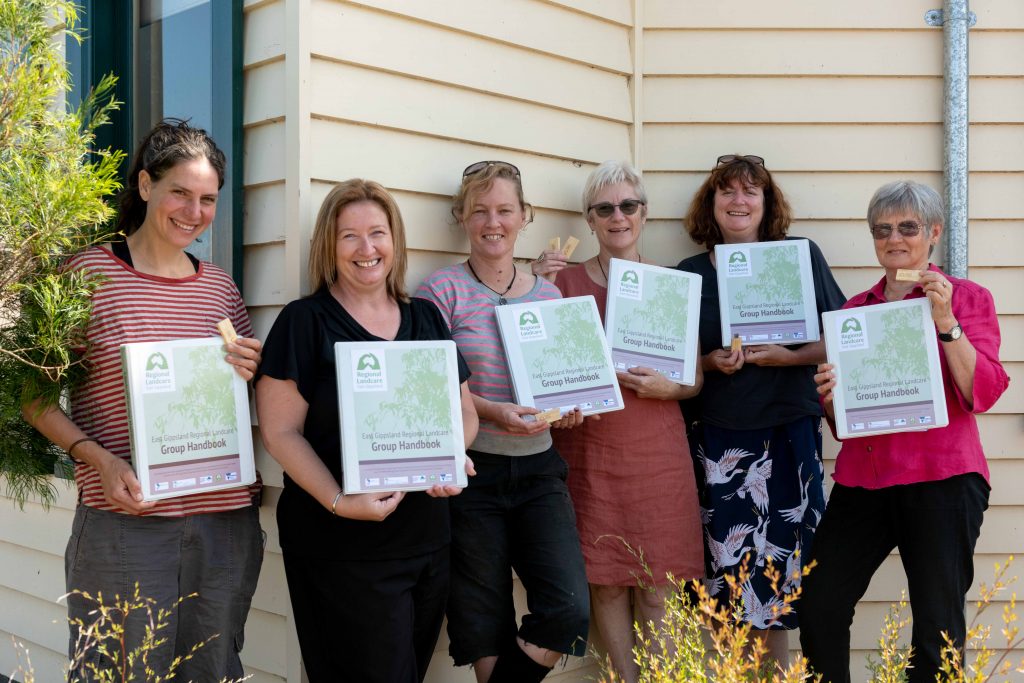 A new resource is set to benefit Landcarers throughout East Gippsland by removing the administrative burden that many groups feel and providing useful and relevant information.

A collection of resources designed to take the mystery out of good governance and record keeping, the handbook comes in electronic and hard copies and provides information on running a successful community group. It includes a variety of templates, from agendas and minutes to capturing volunteer hours, which can be customised by each group to meet their needs.

Penny Gray, Network Co-ordinator with FEVL, was instrumental in creating the handbook and is excited by the benefits of an electronic version. “The handbook provides a one-stop shop that we’ve never really had before. It will allow groups to get on with what they want to focus on rather than getting bogged down in paperwork.”