“The Gippsland Lakes, and particularly the rivers that feed them, are an important place for the Gunaikurnai, they’re the lifeline for our people when they’re travelling through country.” -Grattan Mullett Snr, GLaWAC

The Gunaikurnai Land and Waters Aboriginal Corporation (GLaWAC) NRM crew recently undertook training on a forested site north of Bairnsdale. The day provided an opportunity to gain skills and share knowledge about the biodiversity of our local region.

The training was delivered by the East Gippsland Rainforest Conservation and Management Network with funding administered through the East Gippsland Catchment Management Authority (EGCMA). It was designed to promote an understanding of techniques used in the detection and monitoring of forest dwelling species such as gliders, owls, bandicoots, reptiles and bats.

The importance of people working together was highlighted by the EGCMA chief executive officer, Graeme Dear. “It’s fantastic to be able to draw on and share the knowledge and experience of people in our region. Collaborations like this demonstrate how well our community works together to protect our environment.”

The project was funded by the Federal Government through the National Landcare Program. 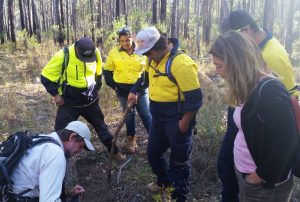 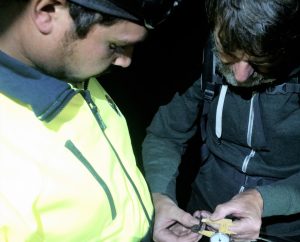 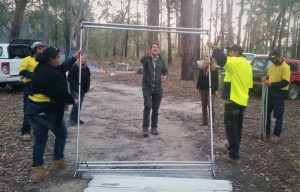 It was a perfect start to the morning when members of the Moogji Aboriginal Council works crew joined staff from the East Gippsland Catchment Management Authority (the EGCMA) for a paddle down the lower Snowy River recently.

The group were reviewing the progress of works from the past 15 years of the Snowy Rehabilitation Project and inspecting the river banks from Jarrahmond to the highway bridge.

Following the inspection, the Moogji crew were on the ground continuing works on the riverbank. The crew is keeping weeds at bay and undertaking planting to compliment previous works to establish a continuous corridor of native fauna on the lower Snowy.

“The Water Plan for Victoria encourages greater involvement of aboriginal people in the management of our rivers” says Graeme Dear, EGCMA CEO. “Engaging the Moogji Aboriginal Council crew for about 10 years now has provided a great opportunity to share an understanding of natural resource management whilst working to improve the health of this iconic river.”

The works are funded by the Victorian State Government.

Local wildlife came out to say g’day last week as the EGCMA led a community ramble around the Red Gum Plains.

Folk who attended had the opportunity to travel to sites in Skull Creek, Bengworden, Forge Creek and Cobblers Creek to see the progress of works being undertaken by the EGCMA partners including Greening Australia, Trust For Nature, Gunaikurnai Land and Waters Aboriginal Corporation, Parks Vic, Gippsland Plains CMN and DELWP.

Wildflowers, a friendly echidna, birds and of course informative commentary from those in the know, were just some of the highlights of the tour. Project sites visited have been funded by the Victorian and Federal Governments to help maintain biodiversity of both plants and wildlife across the region.

Three buckets of seed is all it took for Greening Australia to regenerate ten hectares of Red Gum Grassy Woodland at a site near Lindenow South.

END_OF_DOCUMENT_TOKEN_TO_BE_REPLACED

Hidden among the farming properties of Forge Creek is a patch of ground that has come to resemble a chessboard with alternating squares of pasture all of various lengths and condition.

The site is a demonstration plot run by Southern Farming Systems (SFS) for the benefit of the National Landcare Programme’s Topsoils initiative, funded by the Federal Government and administered by the East Gippsland Catchment Management Authority (“the EGCMA”).

The chess player is SFS Gippsland Coordinator Janice Dowe who has spent the last two years trialling the addition of various soil treatments to test for productivity increases.

Ten treatments, including super, limes, copper and zinc amongst them, are applied in a variety of combinations over an 80m x 100m allotment in a grid like pattern. “With everything here on the one site, different fertilisers in the same situation, your comparing everything on the one plot to see what’s working” says Janice.

The trial site has been designed to compliment the trials being undertaken by the Topsoils farmer led focus groups. Where many members are low input operators, this site includes higher inputs and demonstrates the effects of multiple options.

“Southern Farming Systems is different from landcare Groups” says Janice, “which creates a good level of diversity for the farming community.”

While Janice acknowledges that not everything is going to work she suggests that that’s the beauty of small plot trials. “A farmer can come along and say I grow that one and it’s in a similar area, they can see which one does better and think maybe I’ll try that one next year.”

“We’re giving farmers the understanding and opportunity to push their options further with scientific rigour, it’s a chance to try before they buy.”

For more information about the Topsoils Programme contact the East Gippsland Landcare Network.